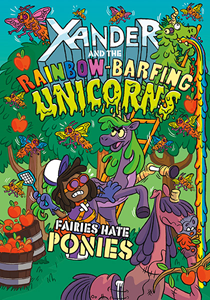 Part of the Xander and the Rainbow-Barfing Unicorns series

Xander and the Rainbow-Barfing Unicorns Pack B of 2

Xander Stone is your average twelve-year-old boy. And, like any average twelve-year-old boy, he didn't believe in unicorns. No way. No how. NOT A CHANCE. Then one day -- BLECH! -- one puked on him. Yes, PUKED on him! Filthy, sticky-icky, rainbow-coloured puke. If seeing is believing, Xander got beliefed all over his favourite trainers. UNICORNS WERE REAL! Not the beautiful, brightly coloured, tra-la-la-ing ones in fairy tales. But stinky, zombie, rainbow-puking ones. At that moment, Xander Stone vowed to protect them and their disgusting secret at all costs -- oh, and keep his trainers squeaky clean. Packed full of grotesquely delightful characters and fantastical adventures, Xander and the Rainbow-Barfing Unicorns from writer Matthew K. Manning (Batman/Teenage Mutant Ninja Turtles Adventures) is so epic it'll make you wanna puke. Part of the Xander and the Rainbow-Barfing Unicorns series.

All Titles in Xander and the Rainbow-Barfing Unicorns