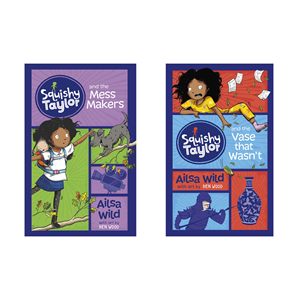 Part of the Squishy Taylor series

Squishy Taylor Pack A of 4

In this hilarious mystery series, Squishy Taylor is a cheeky, sneaky 11-year-old who lives with her dad and step-family in a very crowded apartment. Luckily for Squishy, their building is huge, and there's always plenty of strange stuff going on! Whether it's cranky Mr. Hinkenbushel behaving suspiciously, an ancient vase disappearing from a locked apartment or a mysterious runaway living in the basement, Squishy Taylor is on the case. Part of the Squishy Taylor series.

All Titles in Squishy Taylor