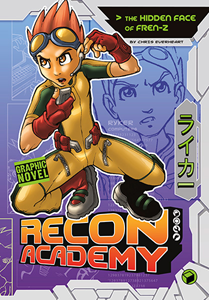 Part of the Recon Academy series

Born into a world of rising threats, four young people witnessed terror strike the safety of their town. As they grew up, each one developed a unique ability: forensics, martial arts, computers and gadgetry. In the halls of Seaside High, the four of them united. They combined their skills and brains and formed the youngest, and most high-tech and secret security force on Earth -- The Recon Academy. Part of the Recon Academy series.

All Titles in Recon Academy