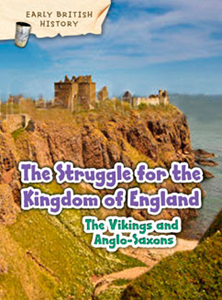 Early British History Pack A of 4

This fascinating series covers a long period of early British History, right through from around 840,000 years ago, when the first tools were made by hunter-gatherers in what is now known in Norfolk, all the way up to the Battle of Hastings in 1066. Covering the lives of early tribes such as the Celts, Picts and Scoti, the Roman invasion and settlement in Britain, followed by the Anglo-Saxon and Viking invasions, the series shows how the influences of these various incoming cultures shaped the Britain that is today. Using primary sources and including lots of information about daily life, homes, education, jobs and much more, colourful maps and fact panels on important figures and events of the times, as well as information on how the current English language has been influenced by these settlers, this series is a must for those wanting to know more about life in early Britain. Part of the Early British History series.

All Titles in Early British History