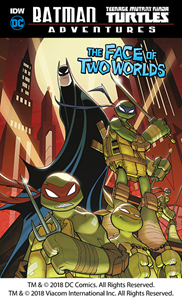 BATMAN and the TEENAGE MUTANT NINJA TURTLES collide in this action-packed comic book series. When the Dark Knight's worst enemies mysteriously escape from Arkham Asylum, the World's Greatest Super Hero discovers that they've left Gotham City. The Joker, Harley Quinn, Poison Ivy and other evildoers are in New York - home of the Teenage Mutant Ninja Turtles! Batman and his heroic sidekicks, Robin and Batgirl, must learn to work with their newfound friends, or both their worlds may be doomed. Exploding with high-impact art and fast-paced text and enhanced with educational back matter - this comic book series is sure to be a SMASH hit! Part of the Batman / Teenage Mutant Ninja Turtles Adventures series.